20 dog photos to melt your heart on Valentine’s Day!

What do our top 20 dog photos have to do with Valentine’s Day?
Well, we discovered that Valentine's Day has an unexpected origin, which gave us a good excuse to look at some damn fine dog photos from the Head On archives!!

Valentine's day, associated with romantic love since the 14th century, has murky origins. The History Channel claims it’s linked to a debauched and bloody pagan celebration called Lupercalia. From the Roman legend of Romulus and Remus, Lupercalia was supposed to not only please the Roman fertility god Lupercus, but also, and more interestingly, to honour the she-wolf that had adopted the twins!

In light of this, the dog lovers at Head On Foundation (that’s all of us right?) decided a celebration of our fluffy, foxy, doggy friends would now be in order for Valentine's Day.  See what we did there? Puppy love - it’s a thing!

So we asked canine lover, our very own artistic director, Moshe Rosenzveig OAM, to dig through Head On’s archive for photographs that say something about the bonds we share with ‘our best friends’.  He discovered that, although not a particularly frequent theme, and certainly not a category, dogs have been turning in up in photos submitted to both the Head On Awards and the Festival since the early days. The results aren’t just cute - some are simply stunning!

So kick back and celebrate Valentine’s Day with us in an almost Roman way.

Dogs in the Portrait Awards

Firstly, let’s feast our eyes on some stunning submissions that featured dogs in the Portrait Awards. 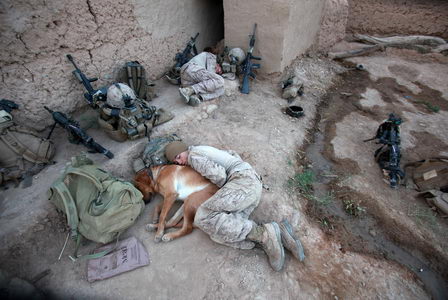 Gary Ramage submitted Best Mates in 2011. Ramage explains of this heartfelt image: “United States Marine, 20-year-old Lance Corporal Brandon Tucker huddles up to his explosive detection dog Auggie to keep warm during the night.  Brandon is a Marine Dog Handler from Guntersville Alabama. This was his first operational deployment to Afghanistan. Brandon and Auggie had been working together for six months.” 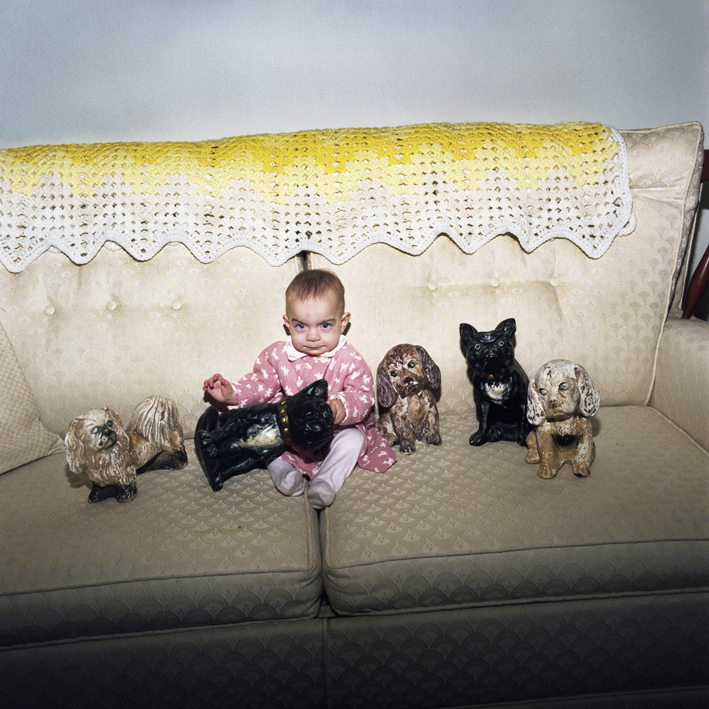 Another stunning photograph from the 2011 Portrait Awards that we can’t ignore is Shauna Greyerbiehl’s portrait Grey. A winner that year, it depicted her niece looking up from a couch surrounded by mournful ceramic dogs. Shauna explains: “They are inappropriate playmates for a baby – except perhaps the serious one who meets the camera’s gaze from beneath that striking brow.” Greyerbiehl is renown for capturing odd elements in her work and  the quirkiness of this shot is delightful. Read more about this and her other work here. 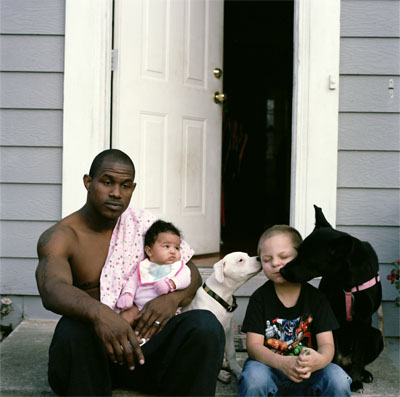 In 2013, Didi S Gilson submitted this beautiful family portrait with pets - Untitled (Image from Infused & Blended - Face of the New Family) featuring Bobby, Thearee and Justice (with the dogs Armani and Dolce). In a previous blog piece here, Didi talks of his experience with the family and their dogs when making this shot.

It was Jonathan May's heartbreaking portrait entitled Stanford that won the Head On Portrait Award in 2013. This incredible photo garnered thousands of likes and comments when we posted it to Facebook. From Jonathan’s Awake series (that was also a Featured Exhibition in the 2013 Festival, it shows a young, badly disfigured boy in a spider man suit, squatting next to a sorry looking dog.  Taken in Kenya in 2007, Jonathan explains that Stanford and his family were forced to leave their home due to tribal tensions.  Stanford suffered from a rare skin condition that made him highly sensitive to the sun. Life in the barren IDP (internally displaced people) camp, where they ended up, caused his condition to deteriorate so badly he was left without sight and struggling to breath through his nose. Jonathan noted “Surgery is way beyond his mother's reach.” 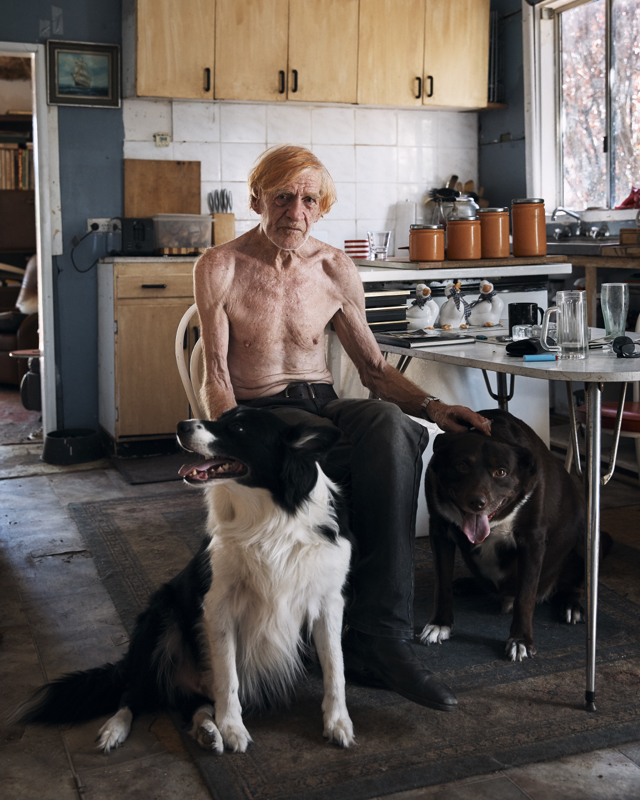 Joel Pratley’s Tony was entered to the Portrait Awards in 2019. Joel writes: "“I want to write a book about my life." Tony has retired in Goulburn with his partner Kevin. "Growing up gay back then was very, very different to now." Though Kevin has faced much hardship over the years, he is grateful for the communities he has been a part of during in his life. "Everywhere we have lived over the years  we have been accepted in the community that means the world to us.”" 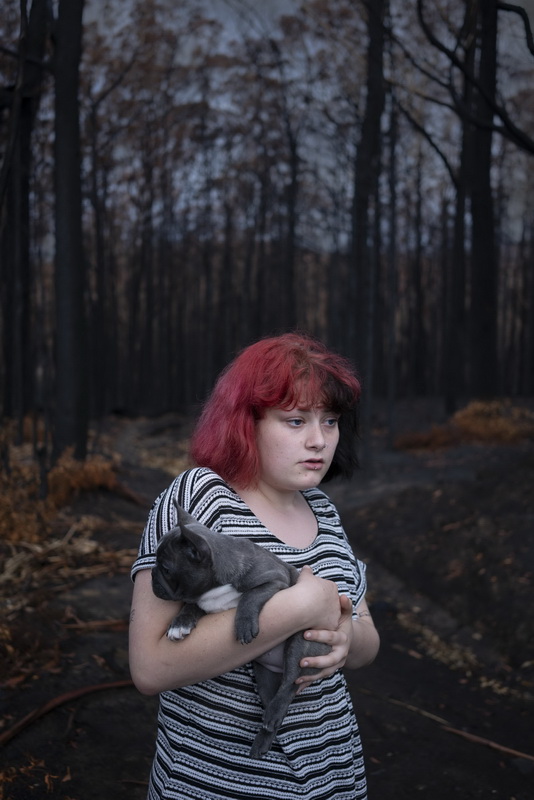 And our final shot from the Portrait Awards, from 2020, is Andrew Baker's tender Alannah and Nova.  He explains “The firestorm struck Conjola Park on New Year's Eve. Alannah was stuck on the freeway when her father called, "Glenn's house is on fire I've got to go, I love you!" he said. She waited in the car, under a red sky. An hour and a half later he called back. The small lakeside village lost 89 homes, flames hit on three sides at once. It was so fast, residents could do little to defend their houses.”

Dogs in the Mobile Awards

We had a few dog shots in the erstwhile Mobile Awards over the years, but the stand outs are: 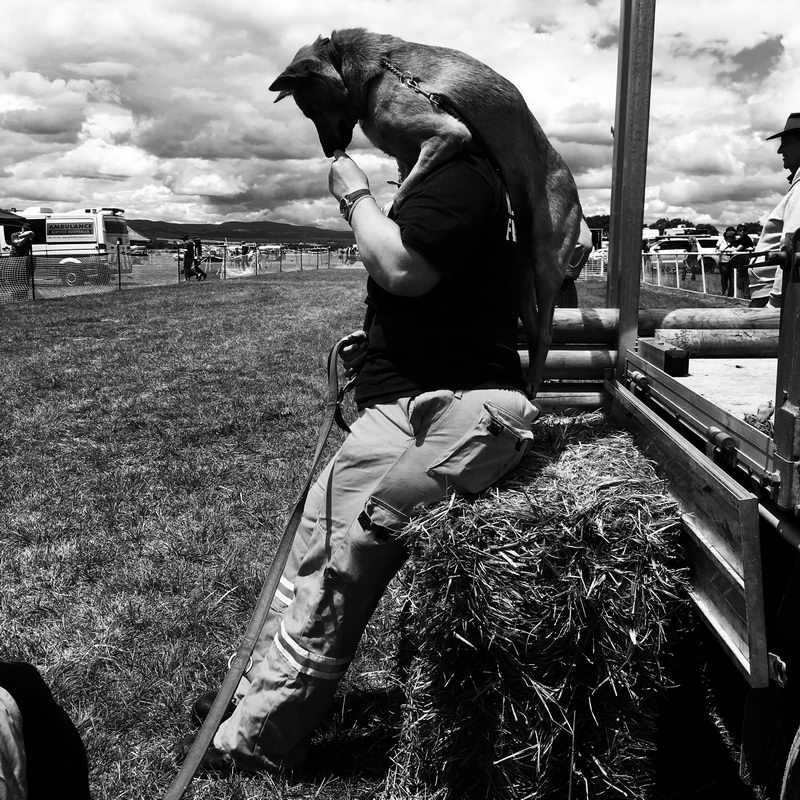 Nick Moir’s Dog Head from 2016. “A Rural Fire Service member allows her dog onto her shoulder while at the Bungendore show.” 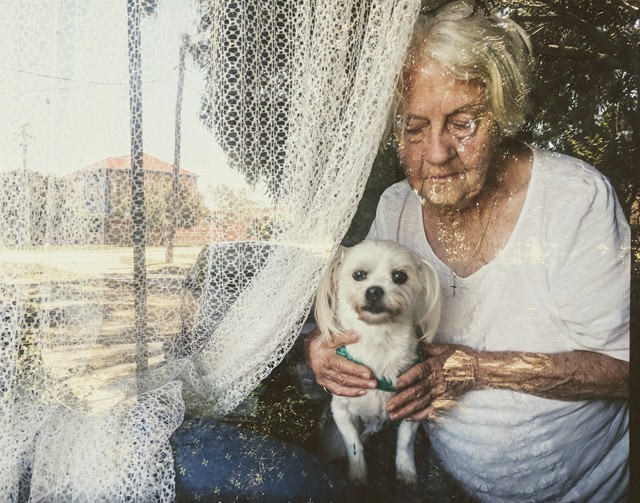 And Candy Goldsmith’s 2018 entry Waiting for Anything. “A portrait of my Nanna and her beloved dog 'Bella'. My photographs of her were once full of vibrancy but lately, capturing her fragility through the lens, I feel as though I am watching her fade.”

Dogs in the Student Awards

Dogs are also often a feature of the photographs submitted to the Student Awards.  Here are some of the best: 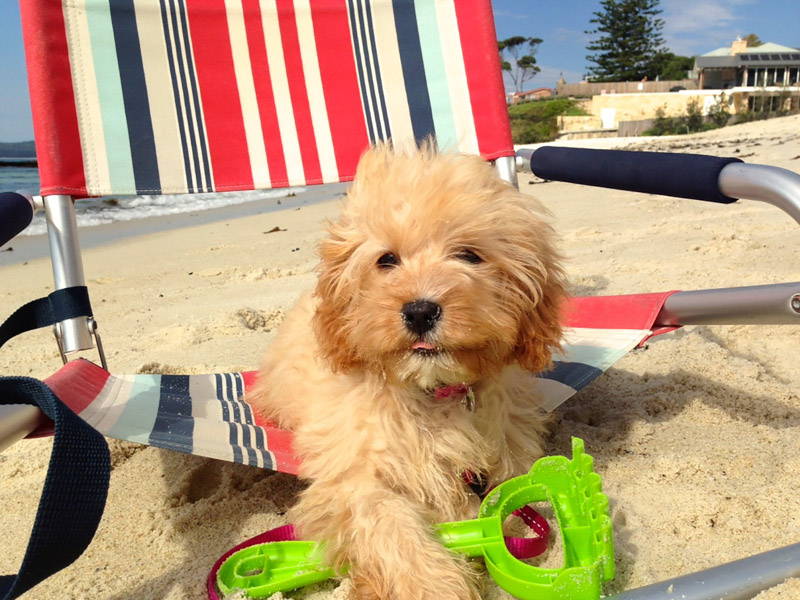 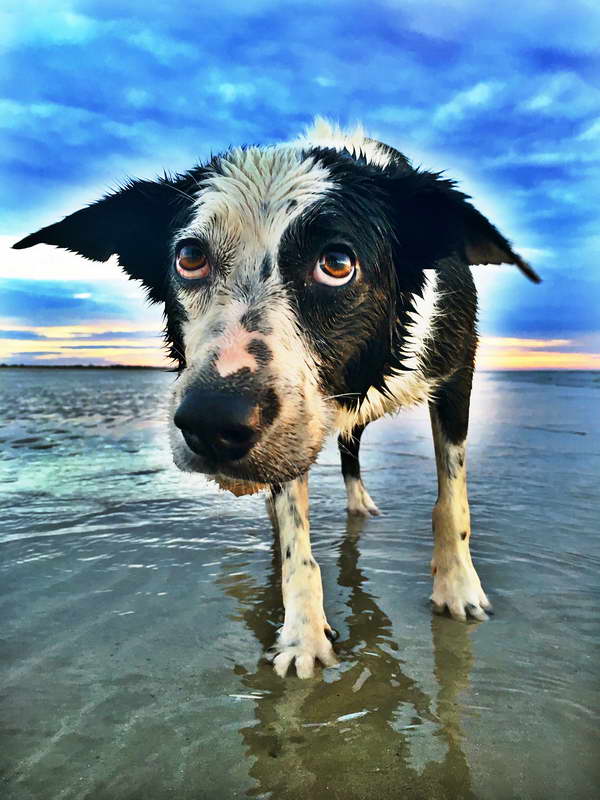 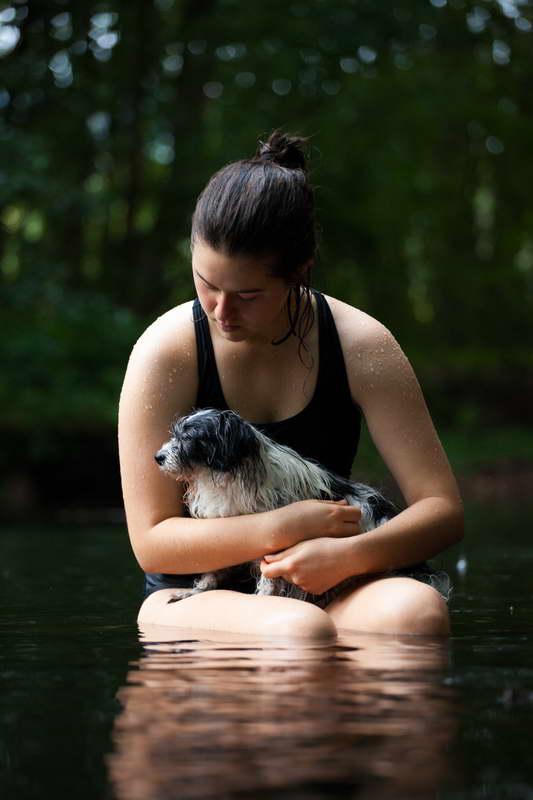 Sage Cartwright with Poststorm, 2017.  “Poor little Rosie got such a fright when she heard a distant clap of thunder, from a storm that'd just passed, that she jumped straight into the creek my friend and I were swimming in and paddled out for a reassuring pat.” 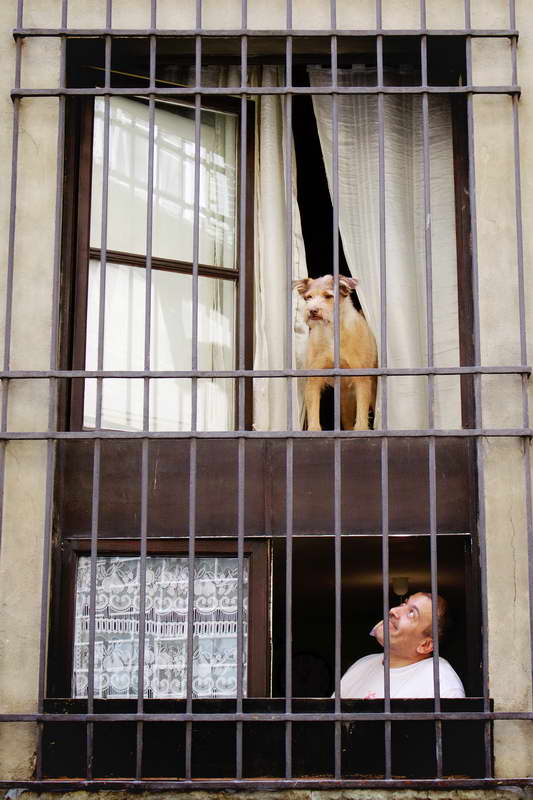 Sophie Smith with Man’s Best Friend, 2017, that "explores the relationship between dog and owner. Whilst walking the streets of Florence, I came across a small scruffy dog barking at people walking by. The owner and locals were equally humoured by his sense of proprietary.” 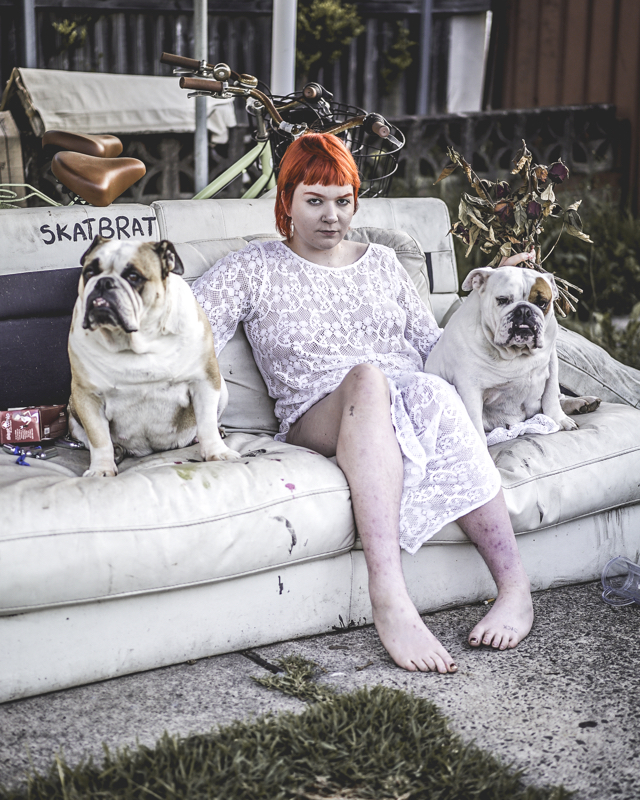 And finally Mason Wang's Skatbrat was in the 2019 Student Awards. “Taken as a part of a series for my friend Tay, who invited me to document the burning of flowers gifted to them by an ex-partner in a healing ritual of final closure.”

Dogs by our Exhibitors

We've also had a few exhibitions dedicated to, or featuring dogs, most notably: 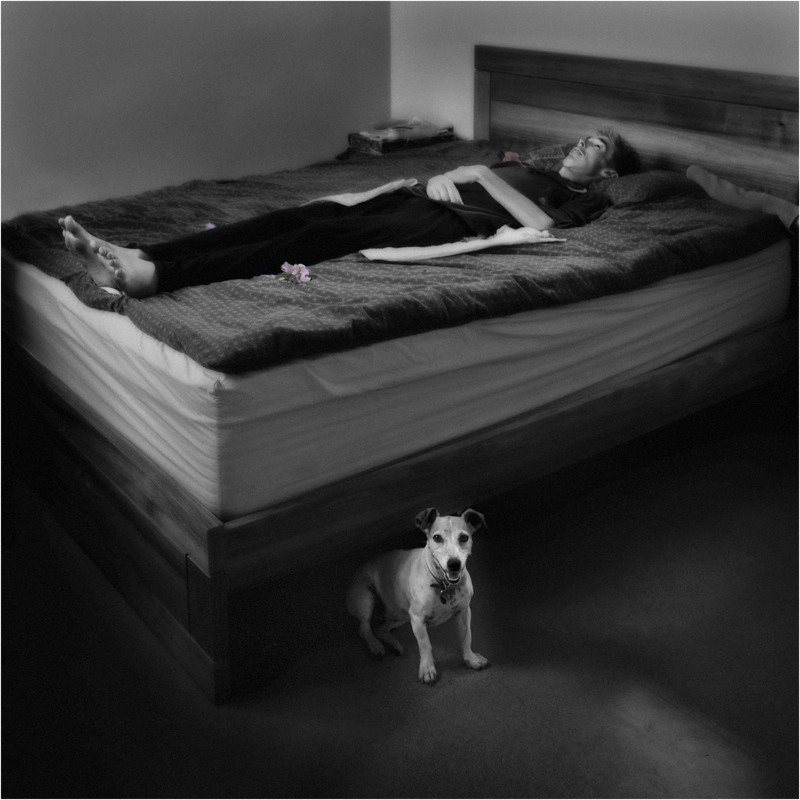 Hilary Wardaugh's heartfelt show from 2011 Die like a Dog that explored the death of a dear friend of hers in 2009. On his final night his friends and family gathered around to spend some happy time with him and his beautiful dog. 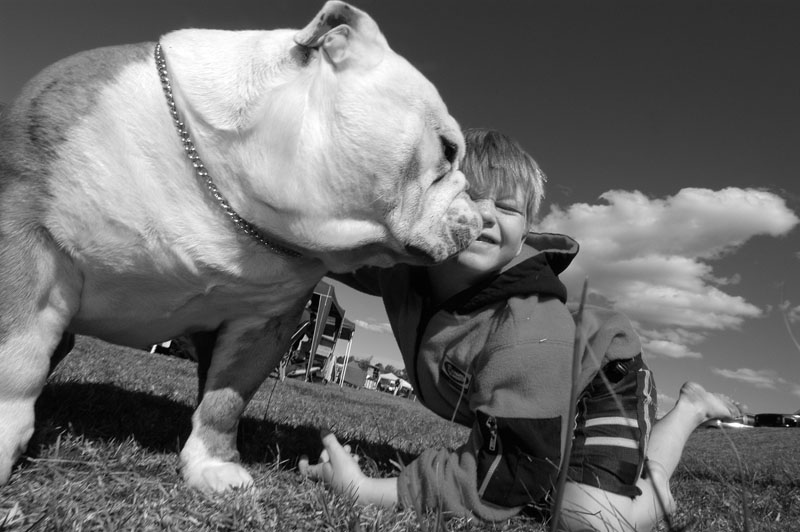 In 2013 Holli Holtzer created It’s a Dog’s Life, an exquisite exhibition of photos of dogs that was hung among the trees along the walkers’ path in Centennial Parklands. Lovers of dogs and art alike had an opportunity to stroll through the stunning park with their furry friends and enjoy a unique day out. 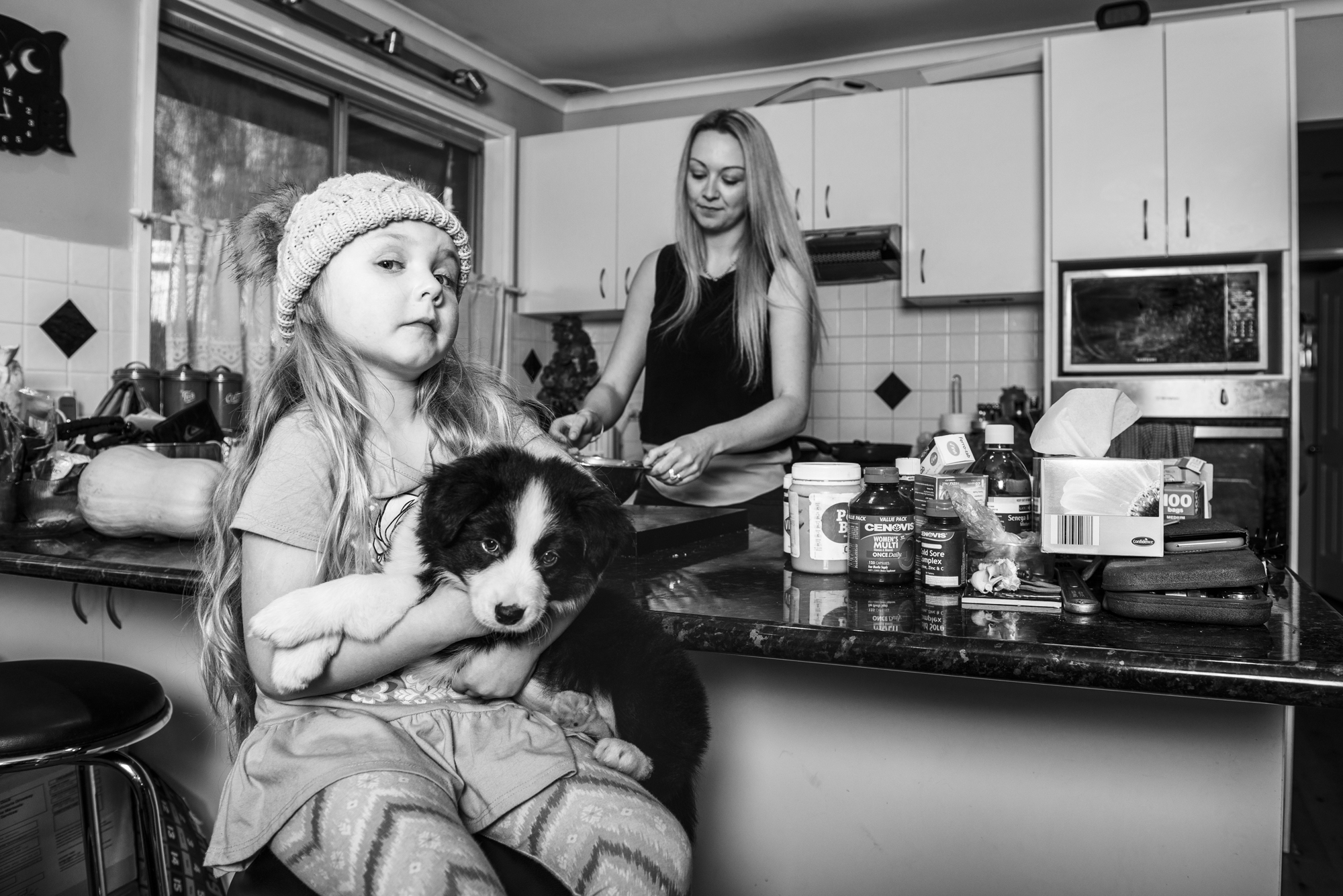 Magda Greenfield’s delightful 2018 exhibition and book Dogs of Sydney was her way of showing how dogs are involved in our everyday life, depicting different families, different social demographics, and different parts of Sydney. Despite their differences, they have one thing in common - they all share the same love for their dogs.

And to round off our doggy adventures, we'll finish with some smaller images with our canine friends from the early days of the Awards. 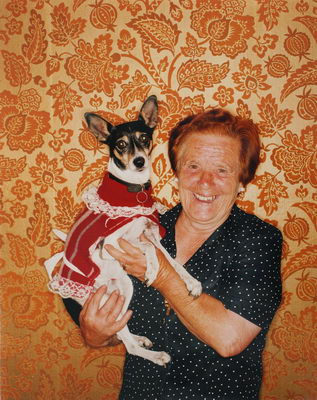 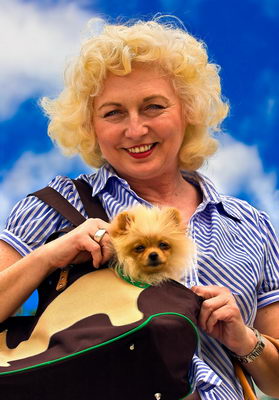 First up, we go all the way back to 2005, with George Fetting’s simple but jovial Bella and Maria.  John Van Den Broeke’s untitled portrait is the pick from 2009. 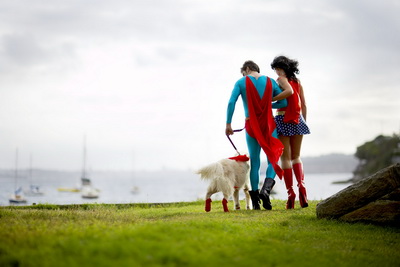 In 2007, Christian Mushenko entered the whimsical Superheroes and in 2008, an inexplicably busy year for dog shots in our Portrait Awards,the pick of the crop has to be Jules Boag’s wonderful Dogs' Breakfast:

We do hope you enjoyed these wonderful shots; and if you have stunning photos of your canine friends, why don't you share them to Instagram using our hashtag #headonphotofest and we'll feature a couple that speak to us!